A Map of Egypt before the Sands 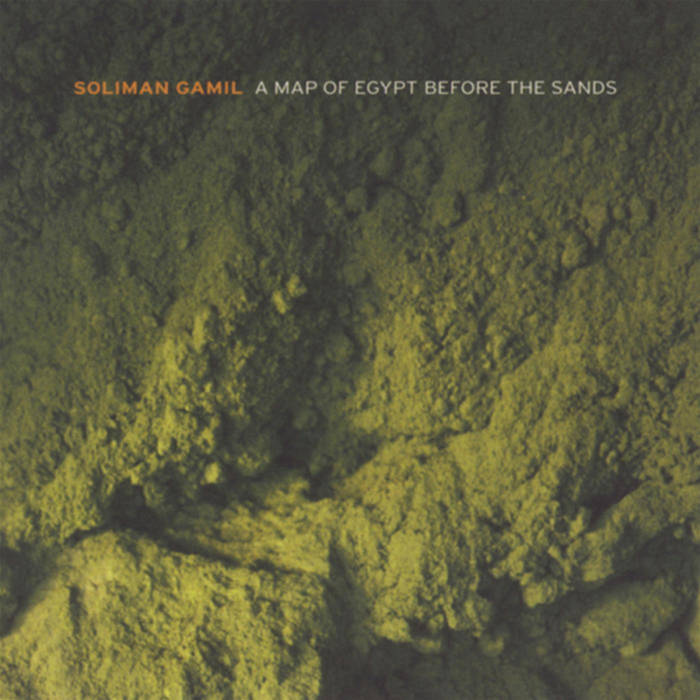 “In the sleeve notes to A Map of Egypt Before the Sands, Egyptian Composer Soliman Gamil describes his homeland as “the starting point in the evolution of musical civilisation”. He is talking specifically about melodic instruments such as the ney, a flute made out of reed, rather than drums which were probably developed a few thousand miles to the south well before the beginnings of ancient Egyptian civilisation. This implicit linking of Egyptian music to the Western tradition is made clear in Gamil’s music, a surprisingly successful fusion of the acidity of Middle eastern scales and the sweetness of European melody. A Map of Egypt is a compilation of tracks from Gamil’s two previous Touch albums, The Egyptian Music and Ankh, in which traditional Egyptian instruments sit alongside elements from the orchestral spectrum. On some tracks, Gamil uses flutes and oboes to double Egyptian instrumnets like the sallimaya (a flute) and the mouzmar (a reed instrument); on others any hint of Egyptoiserie is avoided by keeping the two separate – the timpani pounds away like it’s still on duty for the 1812 Overture while the folk musicians are left alone to do their thing. For purists, there are tracks where there is no western influence whatsoever; otherwise, the most interesting explorations of tone and timbre occur under the conditions of forced osmosis.” [Peter Shapiro]

Two records by the Egyptian composer and musicologist Soliman Gamil were released by Touch in the 80s. A few years ago, when copies of these records sold out, Touch decided to collect the best tracks from these two releases, add on some bonus tracks as a lure to those who had already purchased the previous two LPs, and release them on one CD titled A Map of Egypt Before the Sands. Released in 1987, The Egyptian Music (why there’s a definite article in this title, I’ll never know) contains 12 pieces of traditional and classical Egyptian music, steeped as they are in a rich cultural history spanning the centuries. Mostly these are pieces for small ensembles, exploring the use of traditional Egyptian instruments (kanoun, sinsimia, rababa) with Sufi melodies and citing various Egyptian folk traditions. There is also a handful of orchestrated pieces which for me seem to blend both eastern and western traditions. Although these are mostly instrumentals, there is one vocal track on the record (“Pretence and Destiny”), which in its weary chorus of men and women is suggestive of both prophesy and ritual. It’s easy to see that Gamil had composed for the cinema; many of these pieces move along with a cinematic pace, and listening to these pieces I can easily imagine the accompanying images of a vast desert, the flow of the Nile, or a cluster of weary travellers making their marks across the sand. Many of the pieces are like “scenes”, or vignettes that end suddenly, as if to fit into a particular cinematic time frame. One of my favourites here is “Sufi Dialogue”, a dialogue for lute and kanoun with an incredible performance on tabla, pulling me in with its deep and resonating bass. Also “Rhythmic Dialogue”, for the allure of its unrelenting rhythm on tabla and doff, and “The New Nubia”, an improvisation for sallamiya, kanoun and trumpet. Gamil may be a string player at heart (he is a virtuoso on the kanoun), but I find the most compelling instruments here to be the percussion, since there is a strong percussive element in each of the three pieces I cited above as being the most memorable for me. The sound quality of these recordings is a little muffled, which at first (if I remember correctly, all those years ago) was a little disappointing. But I must admit that later this very quality lent itself to the overall charm of this music. At once distant (in time and in space), but so near, this is incidental music with a universal voice. Gamil does something more than interpret Egyptian musical traditions and structures; he creates something new out of them, something pleasant which appeals to both oriental and occidental sensibilities, music with a strange charm and a gentle, lyrical voice. [Richard di Santo]

Recorded in Cairo. Thanks to Suraya Moyine, The Egyptian State Information Service. Cover by Jon Wozencroft

Soliman Gamil was born in Alexandria in December, 1924. he years he studied piano, harmony, counterpoint and orchestration with the Italian professors Minato, Campizi and Hekman amongst others. In 1950 Soliman went to Paris to study composition for one year at the Ecole Normale de Musique. He has composed music for cinema and theatre, winning several national and international prizes, including one from Leipzig for his music to the film, ‘Drums’, and another from the Critics’ Society in London for the score to ‘Eloquent Peasant’. In 1967 he was awarded the Egyptian State Order of Merit, First Class, in Arts and Sciences. He represented Egypt at several international conferences on music. In 1969 he founded the Egyptian Folkloric Music Orchestra, affiliated to the Ministry of Culture. One composition, “Cantatta for Cello”, was chosen as ‘morceau impose’ in the cello composition for diploma studies at the Brussels Conservatoire in June 1982. Soliman Gamil lectured at the Higher Drama Institute, Academy of Arts, Cairo and he was a member of the International Association of Musicologists, Switzerland. He died in 1995.

Soliman Gamil was born in Alexandria in December, 1924. he years he studied piano, harmony, counterpoint and orchestration with the Italian professors Minato, Campizi and Hekman amongst others. In 1950 Soliman went to Paris to study composition for one year at the Ecole Normale de Musique. He has composed music for cinema and theatre, winning several national and international prizes. ... more

Bandcamp Daily  your guide to the world of Bandcamp